Integration with wearables and other new technology

Sitting in his doctor’s office three years ago, Joel learned something that many of us can probably relate to. As his doctor advanced through routine questions, she asked how he was sleeping at night. Instead of responding directly, he grabbed his phone and showed her his Fitbit sleep tracker. His history for the past month was displayed in a beautiful graph. The doctor was Joel’s age, a Gen X’er, and tech was natural for her. Surprisingly, she looked confused, so he summarized that he was getting “something like 6-7 hours [of sleep] a night.” Nothing. That did not help. Finally, he just said, “I’m sleeping okay.” With that, it was as if his physician let her breath go and moved forward in her decision tree.

The doctor could read Joel’s personal data from the Fitbit app, but she lacked a frame of reference to apply it to her clinical practice. In her defense, she may not have seen this type of data before. How does Joel’s Fitbit data compare to those of patients like him? Is six to seven hours a night enough for him? Joel’s experience demonstrates that higher volume and more detailed patient data may not immediately be useful to patient care without guidelines by which to assess this data. 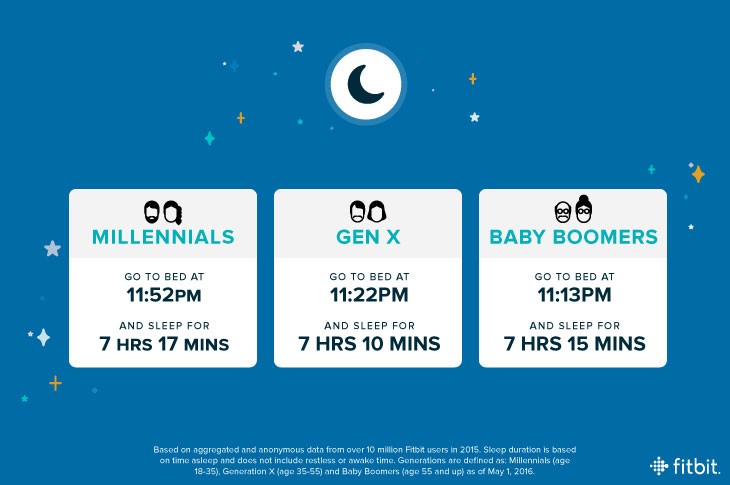 Beyond information at an individual level, personal wearable trackers give us visibility into the health of broader populations. For example, Fitbit recently published aggregated sleep data on 10 million users. Millennials sleep an average of 7 hours and 17 minutes each night and go to sleep at approximately 11:52pm. That’s 7 minutes more sleep and 30 minutes later than Gen Xer’s. (source: https://blog.fitbit.com/how-do-your-sleep-habits-stack-up/)

Questions and data like these prompted Infor Healthcare and Washington University’s Olin School of Business to collaborate with Infor to improve the use of personal wearable trackers. Infor sought to foster ideas and research into such trackers and their applicability in clinical practice. Last year, under the supervision of Dr. Cynthia Wichelman, four medical students – Natalie Griffin, Tracie Kong, Yang Li, and Mary Morgan Scott – conducted a small survey, with n=39, of physicians in a broad spectrum of specialties. Here, we would like to share with you the findings from our survey.

For most of us, acknowledging the elephant in the room is the first step towards progress. To integrate activity based trackers into the medical system, physicians must be comfortable discussing the use of wearable activity trackers with their patients. We asked physicians to rank how open they are to discussing personal wearable trackers with patients on a scale of 1 (strongly opposed to discussion) to 5 (strongly open to discussion). Figure 1 shows the distribution. 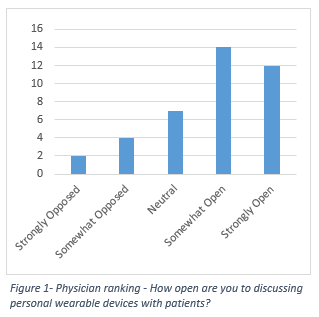 After determining that some physicians would be open to incorporating wearable devices into their practice, the survey continued by asking providers about factors that would enhance their likelihood of using the information collected by wearable devices in patient care. The overwhelming majority would like to see better integration of the information collected into the electronic medical record (EMR), more patients’ using these devices, and technologies for these devices to collect other data not currently available in commercial Fitbits, such as blood sugar levels. The majority did not believe that there is a need to demonstrate the standardization and accuracy of data obtained, access to raw data from the device, or more evidence to support their use. In addition, one physician noted that capacity to track, interpret, and use data real-time would enhance their likelihood of implementing information collected.

Healthcare providers were also asked for the most effective ways to collect information from wearable devices. The majority (54 percent) responded that the most effective method would be an application for smartphones that automatically uploads the results from wearable activity trackers into the patient’s EMR. The application would connect to the EMR through the patient’s medical record number or other unique identifier – usually, this is managed by the enterprise master patient index (EMPI). This would provide physicians with real-time updates of patients’ information such as daily activity level, calorie intake, and sleep pattern.

Notably, physicians often reported education as being a barrier to effectively using the data from these devices. The majority surveyed (20/39, or 51 percent) believe that some education in the form of a 30-60 minute talk is necessary for effective implementation. The majority of the remainder (12/39, or 31 percent) believed that some education in the form of reading an instruction manual is necessary. Only 3/39 believed in the need for extensive education (in the form of a seminar lasting more than 60 minutes), 2/39 did not see a need for any education at all, and one respondent explained that there was not necessarily a need for more education, but instead for validation of the devices’ usefulness in order to encourage widespread physician use of the data.

Continuing on this point, providers expressed concerns in implementing wearable device data in medical practice. The data collected by these devices must be proven to be accurate and reproducible before some physicians will place trust in the recorded data. For example, an inconsistent heart rate tracker would lead to unnecessary anxiety for the patient and physician, possibly even harming the patient. More studies into the procedures and possible protocols for interpreting and using wearable data in physician decisions need to be completed prior to the widespread use of such data. An Internal Medicine physician pointed out that extraneous information can clutter the EMR, which already has an overwhelming amount of data, and complicate patient care. Many of the providers who brought up potential drawbacks to using wearable device data advised that these devices might work best as solely motivational tools for patients. 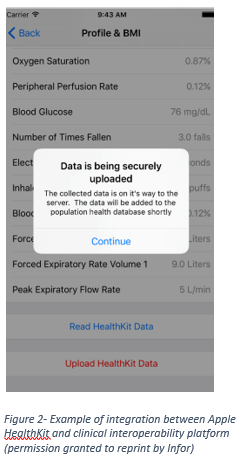 Technology changes rapidly. Organizations like Washington University School of Medicine, Infor, Nike, Apple, Fitbit, and others are actively looking for ways to make a wealth of personal health information relevant for care teams. These are not just “pie in the sky” aspirations that might affect healthcare in the distant future either. Earlier this year, Annals of Emergency Medicine published a powerful case study. “A 42-year-old man presented to the emergency department (ED) with newly diagnosed atrial fibrillation of unknown duration. Interrogation of the patient’s wrist-worn activity tracker and smartphone application identified the onset of the arrhythmia as within the previous 3 hours, permitting electrocardioversion and discharge of the patient from the ED.” (source: http://www.annemergmed.com/article/S0196-0644(16)00143-8/fulltext?mobileUi=0) The care team was able to identify when the condition began (3 hours prior) and thus treat the patient accordingly. The diagnosis was faster, more accurate, and less costly for everyone. Make no mistake, because of this patient’s wearable, he received superior care.

To successfully incorporate personal wearable trackers into everyday care, the data must be connected to care systems. The challenge that clinical connectivity platforms have tackled until now has been interconnecting all the clinical systems within hospitals. At a minimum, laboratory results from pathology must sync with the EMR. Next, all the medical equipment would be incorporated into the system. As wearables become more widespread, real-time patient data from home are now integrated from beyond the walls of the hospital system into the EMR. One example of this integration is the research that Infor Healthcare did to connect Apple HealthKit with the clinical interoperability bus. HealthKit data can now be loaded directly into HL7 messages and transmitted to relevant systems in the hospital. (see figure 2)

Although the relationship between wearables and care teams is in its infancy, our hope is that healthcare providers and software manufacturers will collaborate to expand the use of personal wearable trackers in the prevention, diagnosis, and treatment of disease.