ED performance: How analytics is improving care and patient experience

Emergency departments around the world are under tremendous pressure to reduce patient waiting times and drive clinical effectiveness in all areas. The ED in most hospitals is a fast paced, high pressure environment where no two days are the same and where an increasing demand has led to significant focus on quality and performance. Given this backdrop, data and analytics may not seem like an obvious solution, but the evidence of the impact these programs are having is undeniable.

At the North East Georgia Medical Center, Dr. Mohac Davè, the ED Medical Director has been working with Qlik in their ED for over 2 years, specifically targeting performance, patient experience and patient safety. The ED manages 115,000 patients per year and one of the early findings showed that contrary to popular belief, arrival patterns are actually extremely predictable. “We now know with some certainty that Mondays, especially afternoons and evening, are going to be the highest volume day.” Dr. Davè goes on to say that, “Qlik has allowed us to take this knowledge and provide staffing to demand.”

Focus has now shifted to clinical process improvement, with a great example coming from the care of stroke victims. “We have set a goal from arrival to TPA (clot busting medication) in 60 minutes. With Qlik we can now query performance against this measure accurately and start to make educated process improvements based on the cause of delays, significantly impacting patient care.” Dr. Davè also highlights the ability of analytics to ‘debunk myths’ in the ED. They have proved that patients who left the ED before treatment aren’t always the ones with minor complaints and with this knowledge, have improved staff engagement to reduce walk-outs. 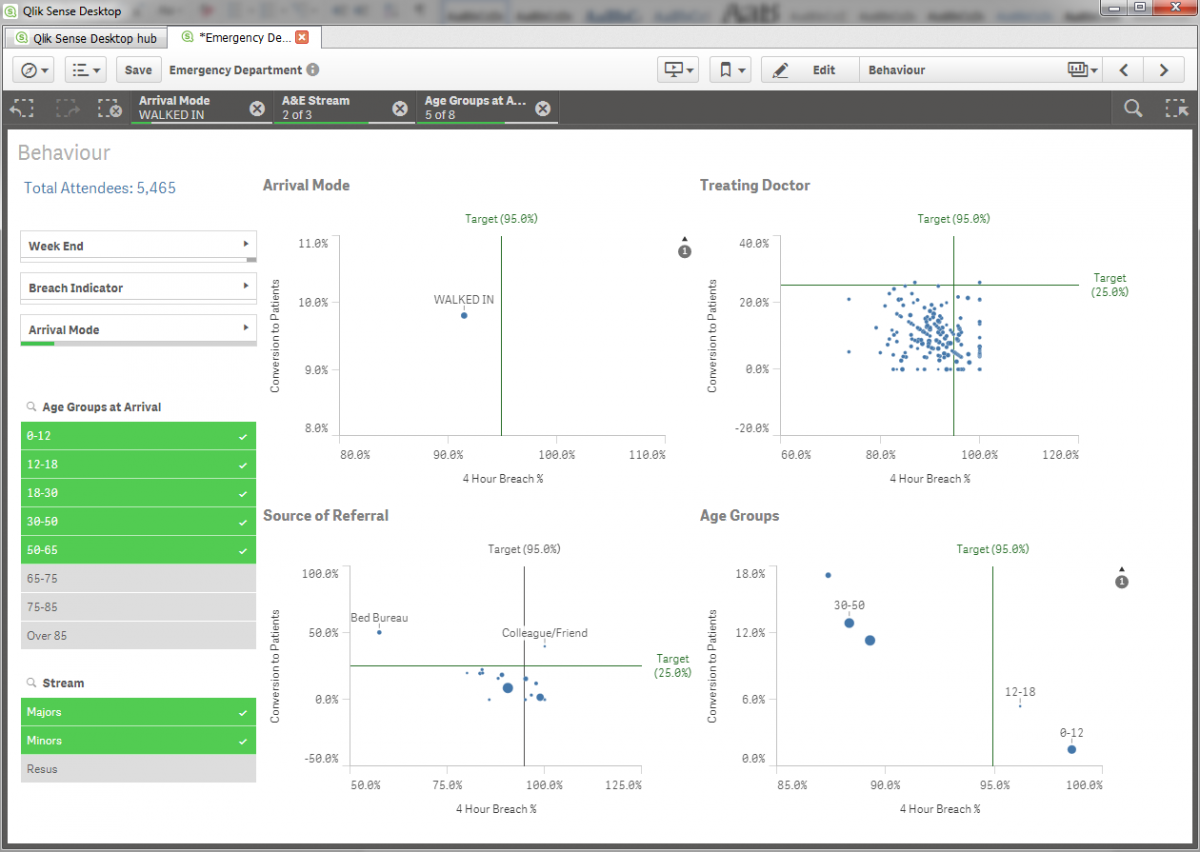 In the UK, where the NHS targets a 4-hour turnaround for 95 percent of patients, analytics is being deployed with a combination of predictive modeling and greater performance visibility through real-time dashboards. One hospital in the North West of England is a fantastic example of putting this theory into action. By combining data feeds from the emergency room and inpatient care, they are able to predict and plan staffing and resource requirements across the hospital to maximize care delivery.

In a recent news interview, the CEO explained that the dashboards have become critical to their operational management. He said, “at regular times during the day, there are team meetings of everybody involved in the unscheduled care system, they will huddle around the data which not just tells them what has happened, but also what to expect in the next few hours. It’s a bit like having a weather forecast which tells you what to wear.”

Physicians within the emergency department are also reporting benefits from seeing the whole story across the hospital. One consultant talked about the ability to see bottlenecks in bed availability and the impact that has on admissions from the ED. He went on to say, “the application not only gives us real-time accident and emergency data, but it also gives us data about what’s going on at the back of the hospital.” He suggested that this insight enables them to focus their efforts in the right places, with the impact being felt right across the organization.

The impact of this program has led to significant performance improvements across the hospital. In January 2015, 87 percent of patients were seen within the 4-hour target – this figure is now above 98 percent. In addition, the number of available beds for emergency admissions has increased, improving the flow of patients through the hospital and reducing the bottlenecks which can impact targets.