Back to the basics: Document scanners 101

In today’s world, scanners are an integral part of collecting data, specifically in the medical field. What I’ve found is that to truly appreciate today’s scanning technology and capabilities, we must first take a moment to go back and appreciate the basics of document imaging and scanner hardware. And trust me, we’ve come such a long way!

First, what is a scanner?

Scanners are devices that take in physical documents and convert them to an electronic format. The user simply feeds a document, or even a group of documents, into the scanner, and files show up immediately on your computer screen. In essence, a scanner creates an image of the document you put in the tray.

One thing it does not do is extract data off of that document. This is performed by a software known as Optical Character Recognition, or OCR, which we will cover in another editorial. Many people mistake this operation as a hardware function saying they want an OCR scanner, but in reality these are two separate tasks.

The most important part of scanning is the connection between the scanner hardware and a computer. In order to scan in and digitize a document, every scanner needs software that will allow the hardware and computer to communicate. This connection is the software part of a scanner called a driver. It’s important to sometimes simplify these things we take for granted in order to understand how everything works from the ground up. Scanners have a unique driver that has a needed variety of functionality to ensure we obtain the right image when we scan.

Most scanners today are standardized on a common TWAIN driver. There are other types of drivers (WIA and ISIS for example) which are not as commonly used. In fact, I would venture to guess that around 90 percent of scanning done today uses the TWAIN standard. Why? Because it gives you all you need in terms of flexibility, and it is easy to install.

The TWAIN initiative started in 1992 by industry vendors who understood the need for a standard protocol and interface to connect software applications and scanners. Since its inception, TWAIN has become extremely influential in the scanning industry. Why? Because its built-in functionality allows users to scan a job without thinking about issues like:

TWAIN is a standard that most hardware vendors follow. Below, I’ve outlined what you need to look for in a scanner. Let’s begin by highlighting the various types of scanners:

As mentioned above, most businesses today focus on ADF scanning. The major benefit of using an ADF scanner is simply the ability to scan a group of documents into a file, including Medical Records, Contracts, and Forms.

Choosing the right scanner or scanner model depends on your budget and needs. When finding a solution, manufacturers provide scanner statistics on each available scanner. Below, the graphic depicts the features you would find in a mid-range, good quality scanner.

As previously mentioned, TWAIN is the standard that most modern day applications use to communicate with scanners. In order to scan into any application, we need to simply install the driver, often shown as the individual device, that comes with our scanner and immediately it will show in the scanner interface. Once chosen, pressing the “Scan” button within the application initiates the scanner. 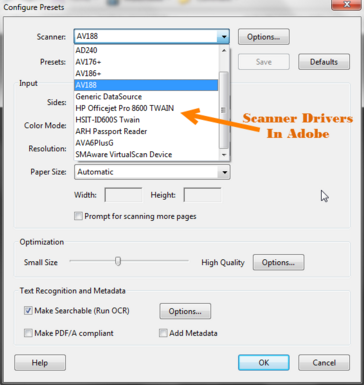 As an example, the below graphic depicts the various drivers installed on my machine. To scan into Adobe I would just open the application, choose the proper driver, adjust my settings (Color, Size etc.) and scan. In this case, I chose to create a PDF of the document image I was scanning.

Most applications today will have a setting that will allow you as the user to select a scanning or TWAIN source. Once that is done not much is needed on the user side other than to hit the scan command or button when ready.

Scanning technology has truly climbed mountains since its inception. While the majority of scanners used today are able to auto-detect your sheet size and adhere to the TWAIN standard, there are many options available you should consider to ensure the needs of your business are truly met. In our next article, we’ll take a look at an additional component worth considering – Optical Character Recognition, or OCR technology. We’ll explore not only how you can leverage document reading with this technology, but also outline the ways it helps to streamline processes and reduce manual data entry requirements.